At the University of Denver, Greg Giesen and Lauri Osborne developed a model called Tuckman Tweaked: A Revised Model of Group Development.

As you know, the forming–storming–norming–performing model of group development was first proposed by Bruce Tuckman in 1965, who stated that these phases are all necessary and inevitable in order for the team to grow, to face up to challenges, to tackle problems, to find solutions, to plan work, and to deliver results 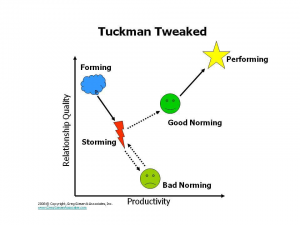 We really love this Tuckman Tweaked model – and who wouldn’t, it has a smiley face in it!

What is also exciting about the model is that it recognises the behaviours essential for, and detrimental to, team success and highlights that without good leadership group development is not a set of stages leading to high performance.

Simply putting a group of technically proficient people, together, regardless of their IQ scores, does not make a successful team.  We all know that.  Success has less to do with who is in a team, and more with how a team’s members interact with one another.  It is the relationships between team members that affect everyone’s productivity and happiness.

Daniel Goleman wrote in Emotional Intelligence that three conditions are essential to group effectiveness: trust among members, a sense of group identity and a sense of group efficacy. In teamwork, emotional intelligence is the essential social lubricant providing the capacity to settle disputes well, brainstorm creatively and work harmoniously.  Our recent blog discussed Google’s data-driven research that found that the best teams respect one another’s emotions and are mindful that all members should contribute to the conversation equally.

All this is great information if you are studying leadership or writing a blog, but how do you translate that into action every day in the workplace?  Maybe you could time everyone with the talking stick to make sure speaking slots are evenly shared…..but what about respecting emotions?  What does that look like? Is it about acknowledging the emotion or empathising?  Then there is trust – everybody knows you need it, but how do you create it?

This is where the model and accompanying paper excels.  By ‘tweaking’ Tuckman’s stages to enhance its relevance to groups, teams, and their leaders Giesen and Osborne divided norming into two separate stages: good norming and bad norming.

During the Norming stage the team establishes ‘Norms’ , these are the attitudes and behaviours, that eventually become the habits, that ultimately decide the groups success.

A team can get to good norming by way of storming; more specifically, by effectively addressing issues and working through conflicts, and emerge as a more synergistic team as a result of their success. Once in good norming, the team quickly gains its balance and enters this tranquil phase as everything begins to settle into place. Team members find standard ways to do routine things, they drop the power plays and grandstanding, and everyone makes a conscious effort to work together. The newly formed norms are constructive in nature and foster teamwork and open communication.

Teams that are unable to address or work through critical issues, conflict, or relationship dynamics, move into bad norming. In bad norming, interpersonal relationships become strained, dysfunctional norms evolve, subgroups and self-protective behaviours emerge, and the team leader’s ability to lead continues to decline. In truth, it is the team leader who is primarily responsible for the team even being in the bad norming stage and it is not unusual to see a widening gap develop between the team leader and his/her team in this stage.

Example behaviours of a team stuck in the Bad Norming Stage

What teams need in the Bad Norming Stage

Team members in the bad norming stage need to know:

When teams enter the bad norming stage, one of two things usually happens: 1) The team stays stuck in that stage and eventually have to be replaced, dissolved or at least dismantled in part; or 2) They fix whatever needs to be fixed by going back to storming and then hopefully on to good norming.

As the model shows, a team in bad norming cannot simply move to good norming without first going back through the storming stage. This means that the team needs to be prepared to address, correct, and resolve the very issues that caused them to move into bad norming in the first place.

Outside intervention at this point can be useful, bringing an unbiased specialist in to facilitate the group development and assist the team work back through storming, giving them the tools they need to move to a better place.

What could prevent a team from moving out of Bad Norming

Take a moment to consider:

We hope you enjoyed our blog?

Please subscribe to our mailing list to get more great ideas and updates fortnightly. In return we will send you our free ebook ' The Essential Guide to Exceptional Communication'.

You have Successfully Subscribed!

Thank you - We will email you our free e-book Essential Guide to Exceptional Communication. We will send you our fortnightly newsletter. We will not spam you or send you sales messages. We will always give you an opt out option!