Taboo for more than 500 years, a recent news article suggested that the infamous four letter word has become so commonplace that it is no longer obscene and is now acceptable in everyday conversation.

Any Queens reading this who follow the wonderful Constance Hall,  Australian blogger and freedom fighter, will no doubt agree.  The F word has become the one magical word, which just by its sound can describe pain, pleasure, hate and love and it falls into many grammatical categories: adjective, reinforcing adverb, noun, verb….

The first time I heard the word, I was seven. My friend Ruth from 3 houses up the street asked if I wanted to know the worst word in the world. She whispered it to me and, although she was not sure what it meant, we both loved the idea of a word so rude that it could barely be uttered!

I am not sure what happened next, but I remember I was sent to bed early that night.  Obviously, the pleasure of my new knowledge waned without the ability to share it.

So here we are in 2016 and if you are a social media user you are almost certainly immune to the impact of this (apparently previously) obscene word go now.  It appears that Society is changing.

What about in the workplace, does this softening of meaning in popular language make it acceptable? And if not, how would one know?  Should employees intrinsically recognise what is and isn’t acceptable?  Could they argue, as a man fined for swearing at police in Glasgow did, that they were using “the language of their generation”. (The Judge ruled in his favour.)

There is a law of human nature that says:

Where there are no rules, people will make them up for themselves. 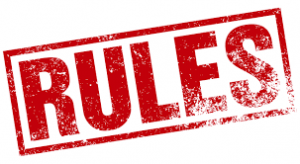 While this is okay in some instances, it is not okay in others.   Left unchecked, peoples’ made up rules eventually become “the accepted way of doing things around here” and then become difficult to change.

Most individuals are not as autonomous as we would like to believe.  Many people are not comfortable without a set of rules and directions.  Standards provide the day-to-day guidance for the simple tasks we do with regularity.  They are flexible enough to be changed when needed, though clearly stated so as to provide a concrete direction to employees.

While most organisations have a large manual filled with policies and regulations, it is not usually comprehensive enough to cover the intricate differences found in different departments and locations.  Every location should have its own set of standards that reflect the idiosyncrasies found across a broad spectrum of business channels.

Keep in mind that Standard setting work is never done.  Once the process has begun, there will always be times when another missing standard is discovered and must be created.  This is the best way to maintain a culture that does not “lay blame” or “look for who is at fault”.

Look first to the system and the standards, and then educate the people.

We hope you enjoyed our blog?

Please subscribe to our mailing list to get more great ideas and updates fortnightly. In return we will send you our free ebook ' The Essential Guide to Exceptional Communication'.

You have Successfully Subscribed!

Thank you - We will email you our free e-book Essential Guide to Exceptional Communication. We will send you our fortnightly newsletter. We will not spam you or send you sales messages. We will always give you an opt out option!